May we help you? Please call us at one of our 3 convenient locations. 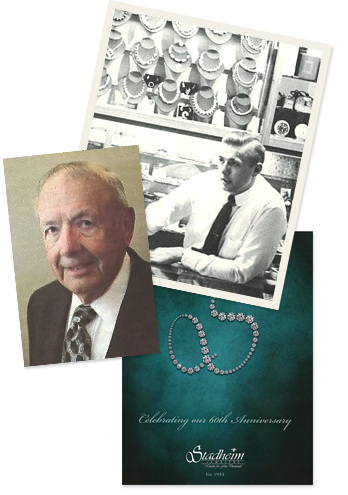 After completing high school in Albert Lea, serving two years in the U.S. Navy, graduating from watchmaking school in Kansas, and attending the Minnesota School of Business, Arnold Stadheim returned home to Freeborn County in 1951 and went to work as a watchmaker and jeweler for Fred M. Goers. Mr. Goers had Fred's Diamond Shop, located in the lobby of the Medical Arts Building in downtown Albert Lea. The entire store measured just 8' x 20' - with a storage room that was only 4 square feet.

In 1953, Arnold purchased the business from Mr. Goers and continued to operate in the same location for 15 years, until 1968, with just one employee, Gordon Kanne. In 1969, with the business growing, Arnold purchased the Corrigan Ben Franklin store at 215 S. Broadway in Albert Lea. After a complete remodel, Stadheim Jewelers was born. The business moved into its new and larger location, which is still the location of the Albert Lea store today.

The larger store allowed for a much greater selection, and through the support of the community and surrounding area, the store and the Stadheim family continued to grow. As family members became involved in the jewelry business, Stadheims eventually made the important decision to add additional locations in nearby communities. The Austin store opened in 1983 at the Oak Park Mall, but has since moved to its own location on 18th Ave. The original Mason City store opened in the Southbridge Mall in 1986, moved to its 4th street location by the Medical Arts building, then eventually moved to its current location further west on 4th street by the Mason City Chamber of Commerce building.

Arnold Stadheim passed away May 2nd, 2018 at the age of 90. We all miss his weekly stops at the store to make sure we were still doing things the way he taught us. He had a simple philosophy for the beloved business he started, "We simply have always tried to treat each customer as a friend, and offer that friend the best value. That's what has made the first 65 years possible, and hopefully will take us another 65 years."

"We simply have always tried to treat each customer as a friend, and offer that friend the best value." - Arnold Stadheim

We have jewelry professionals ready to help.